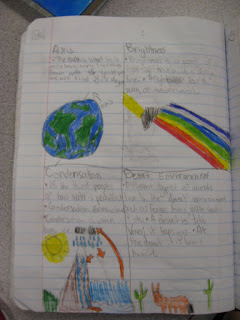 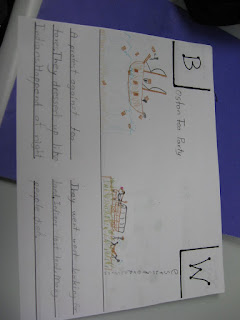 I wrote in an earlier post about ABC books being a great way to review for a test or end a unit, in my case a year, in the notebook. Pictured above you will find three ways where an ABC book can be used. The first is an example from one of my students notebook, the second is the same concept but adapted for a three ring science binder, the last one is also adapted to a three ring binder but is for social studies (all of these are fourth grade examples).
In all three examples we are using the same grading rubric - each block (or letter) is worth five points - three points for your three facts , one point for your picture, and one for color.
Another friend of mine is doing this project with her fifth graders but decided to make the project longer then ours is currently running. In each of the examples above we gave students the term that went with the letter of the alphabet. She had her children find terms that matched the letter - after she approved the final list the students got started. I actually like that idea - gives more ownership to the students. Since it was an end of year project and not an end of unit or review that would be easier to do. Usually in an end of unit or review you want students to zone in on key terms, so giving them the terms at the start ensures those concepts, events or people will be the focus, however for an end of year situation it is less rigid and gives the students the illusion of choice.