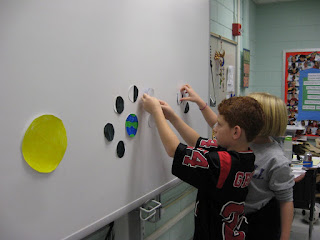 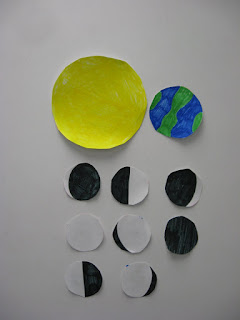 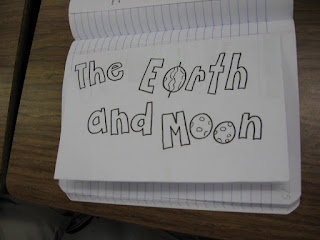 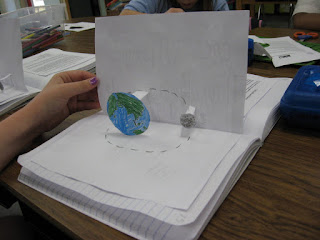 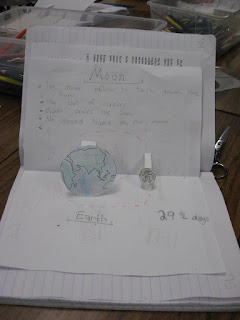 Monday - Showed a PowerPoint I made comparing and contrasting the characteristics of the Earth and Moon and discussed with students. Showed an excellent ETV streamline video (A Closer Look at Space - The Moon. Approximately 20 minutes.) on the subject. No notebooking activity.
Tuesday - Read the left hand information reviewing characteristics of the Earth and Moon. Showed Brainpop on both the Earth and Moon. Worked on Earth/Moon popup books (I made the books and students colored and cut the moon and Earth gluing it in the popup location. Students had to list five ways the moon was different from the Earth and five ways the Earth was different from the moon. They also had to trace a path from the moon around the Earth in the popup and note the number of days it took to go around).
Wednesday - Lesson - Why do we see different phases of the moon? Right hand assignment was to start a moon calendar, which we will update daily until Christmas break. I made the calendar full page size and shrunk it to 76% on the copier.
Thursday - Reviewed the moon, Earth, and phases. Watched Bill Nye Moon video and had students take a quiz to go with it. Finished pop up books.
Friday - Students took quiz then cut out phases of the moon for match up game (which didn't turn out as I hoped...pieces too small. I made a larger set, which we played with on the board with plans to make 5 sets for students to work at with their table grouping).
SHORT WEEK DUE TO THANKSGIVING HOLIDAY (Off Wed. - Fri.)
Monday - Reviewed upcoming science fair requirements. Had early turn ins present. Reviewed phases of moon. Had students put them in order. Reviewed lyrics to the Sun, Earth, Moon rap song, which is in their notebook, and played several times.
Tuesday - Last day before the holiday break combined with a going away party for our student interns. Managed to get computer lab for two out of the three classes. Taught students basics of how to use Photostory and let them play with recording their voices, adding music and changing font with intention of giving them a project to do in science hopefully before the Christmas break. No notebook activity but my back up plan...had the computer lab fallen through...was to catch up any missing work and "on the spot" grade as students finished (which is a good grading technique).

Anonymous said…
Great ideas to demonstrate moon phases and how the moon rotates around Earth. Would you be able to upload or share your template for the Earth and Moon book?

Eve Heaton said…
Sure. I'll put together a little video on how to make a popup book. It is very easy.

The moon and the Earth cutout I just downloaded from enchantedlearning.com (entering a moon and Earth search and looking at the images). Students colored and cut out.

The cover page I drew by hand so I don't have that in my computer to upload. I just took a sheet of paper folded it in half and drew the cover. I made enough copies for all my classes and had one of my students fold during homeroom.
December 2, 2009 at 6:00 AM