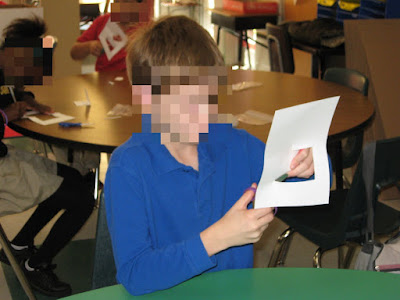 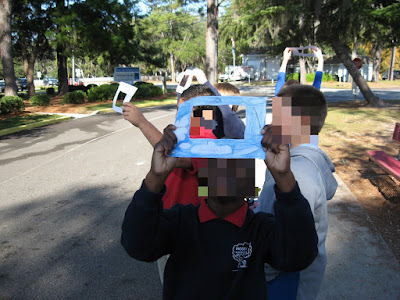 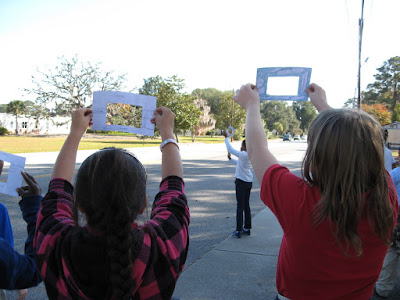 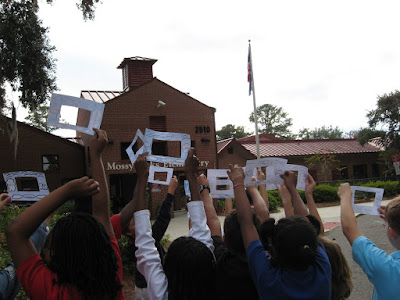 This is an idea I saw on pinterest about making a cloud viewer. This is the site with the idea and here was the idea for the template I was going to use for the outside of the viewer.

I did this with a fourth grade class yesterday and in the planning stages I decided to nix the popcicle stick frame because of time…plus I decided I really wanted them to write on the back of the viewer. I also nixed using a prefab cloud viewer frame because I really wanted children to draw their own representation of the clouds – rather than have it handed to them.
So using the idea from the two sites students created their own cloud viewer. I was dreading the activity a bit mainly because I had never done it before, it was being done on a day before a three day weekend, there was a sub in the classroom, it was a full moon, AND I was being observed. Shockingly the entire activity went textbook perfect in all four classes despite all my concerns J.
The teacher the day before had introduced clouds to the class so they had some prior knowledge before I came in. I started the lesson with a water cycle review and then a review of the clouds. I went over a “recipe” for making clouds where the students got to act it out.

Sure it is a bit oversimplified but it got the kids moving out of their seats and the general concept that clouds form by water vapor chilling, collecting, and condensing.

Then I reviewed the three basic types of clouds (adding in the bonus fourth cloud not mentioned in our standards – cumulonimbus). We have hand gestures for that to help them remember the three types which I definitely will have to tape.

I explained that they were making cloud viewers and that they had to draw and label the clouds in the front and tell me something about the clouds on the back. Once they were done they came up to me and I checked it and handed them a blue colored pencil to shade in around the clouds on the viewer. Once we had everyone done we went outside and looked at the clouds through our viewers and tried to identify the three basic clouds. The sub came in handy at this point because anyone not done had to stay in with her while we went outside. I allowed 10 minutes for the outside part of this lesson (which included traveling in the halls and moving around the school to look for different clouds).

The viewers are going to be stored in inexpensive sandwich bags that will be taped in their notebook on the right hand side. The left hand side had the information the teacher went over the day before.

NOTE: The child in the last picture is looking through her viewer the wrong way. The kids should be looking at the drawings they made.

Anonymous said…
My concern, judging from the artwork visible in these photos, would be that half of those students (or more) would not TRULY learn how to identify different types of clouds if they are using their own artistic renditions as a reference.
June 22, 2012 at 7:42 PM

Eve Heaton said…
What students have to know for cloud types in the fourth grade is not so drastic that their artisitic renditions would hurt them. They essentially need to know that the long flat sheet like clouds are stratus, the puffy white cotton ball ones are cumulous and the thin high wispy clouds are cirrus. I mostly like this activity because it gets the students out of the classroom and working with each other to figure out what cloud they are looking at.
June 25, 2012 at 8:18 AM

Anonymous said…
Awesome Idea! I love the hand jester idea. They will remember using this.
December 6, 2017 at 2:43 PM