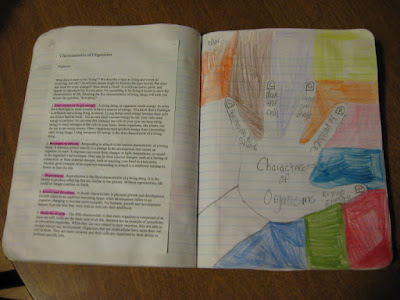 One of the classes I work with has just started their Organisims and their Environment unit. The first thing I usually do with this unit is place a plant next to me and tell children that we are both considered organisims. I have them work in table groups and try to come up with ways they think we are similar (we just became a TAP school so that opening would hit "questioning" and "grouping" on the rubric).
I remember one year a good argument came up in class where one table group said that we are similar because we both move. This led to a girl saying that plants only move if acted upon by another source (i.e. the wind). That led to another person saying that she visited a sunflower patch with her mom and that the sunflowers move to follow the path of the sun. I love those kind of "thinking and sharing" arguments :)
In our standards students only have to know five characteristics that organisims share. I made a Promethean flipchart that covers the five but recently came across a blog where she offered a free powerpoint on the subject (she had 10 characteristics listed). I was having trouble opening the presentation on my home computer because it downloaded as a zip file but will try when I get to school. The preview slides look pretty good.
I also show this YouTube video that I found. It was put together by some middle school students and is silly enough to hold students attention. Never underestimate the power of a YouTube video! I recently reviewed the five characteristics in a class of fifth graders (whom I had taught in fourth grade) and they referenced the video during the review (yay!).
In the notebook I have students choose how they are going to display the five characteristics - web, illustrated outline, or outline of their hand.