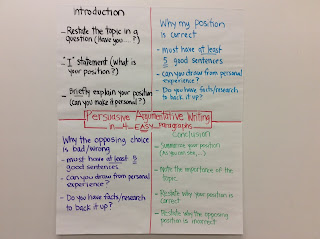 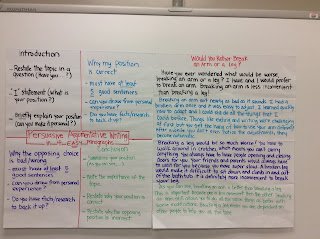 The other day I taught a persuasive/argumentative writing lesson...using technology...to three fifth grade classes. I was modeling how to integrate technology into a writing lesson. For the technology piece I used the new Promethean Classflow to deliver the lesson, I used getkahoot.com to hook and engage the students, and I had students take a picture of the anchor charts I made (see pictures above) and taught them how to create an anchor chart album in their photos.

The lesson I taught was modified from a middle school lesson I found in the Classflow community on the topic that I thought was really good. The lesson can be found on Promethean Planet if you CLICK HERE.  The anchor charts were basically a play on four square writing (which the students were familiar with). I could have created the anchor charts on Classflow and had the students take pictures from that but I wanted to enter the Zaner-Bloser writing anchor chart contest I saw on We are Teachers on Facebook hence the above paper anchor charts :).

I used a "Would you Rather" Kahoot to get students taking a side on a topic and arguing against the opposing side (the two I pulled from the Kahoot are would you rather attend Hogwarts or have a pet Sasquatch? and would you rather fly or read minds?...it was pretty fun to see how students argued the topics). Once the lesson was complete (approximately 20 minutes) students had 30 minutes to write to the following prompt - Would you rather be the smartest kid in the school or the best player on a sports team? They had 30 minutes because that is the time limit they will have on their end of year writing test. Most students did not finish in the time limit but they got some experience writing with a time limit and we got enough student samples to see who "got it" and those who need some extra help.