Back-to-School Activity - Twist on a Pair/Share 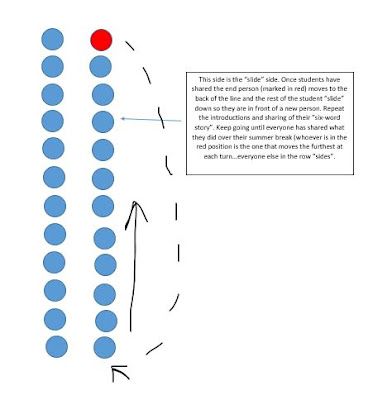 I was recently in a training class where the trainer used a “divide and slide” activity to get us up, moving, and sharing. It was a lot of fun. I thought it could be used for a back-to-school activity along with another strategy I’ve used with students before called a “Six Word Story” (this strategy is part of the Discovery Education Spotlight on Strategies series).

In this activity students would come up with a six words sentence to highlight something they did over the summer. They would then share with their classmates during the “divide and slide”.

- I worked to rescue sea turtles.
- I geocached in five different states.
- My mother-in-law fell breaking her hip.

Give students a reasonable amount of time to write their story (I would cut up paper in fourths and give each child a sheet to write on. Once they were done have them get in the “divide and slide” lines to share. They have to introduce themselves to the person across from them before starting (i.e. “Hi, my name is Eve”…then they share. When it is the next person’s turn they will say “Hi, my name is Jason”…then they share. This way they start to get to know each other’s names.) If a child says they did “nothing” over the summer…challenge them to come up with a six-word story that indicates they did nothing.

You can even grade it as an easy ELA/Writing grade. To get a perfect score the story has to have six words (no more/no less). It would be fun for the kids to go home and say they got an “A” in a writing assignment the first day of school.

If you have time, have students share the most interesting/attention grabbing six-word story they heard (it can’t be their own!).

I use to keep short stories (similar to this) in the student’s writing folder because it can be used later as a jumping off point for longer writing pieces.

If you try it...let me know how it goes!