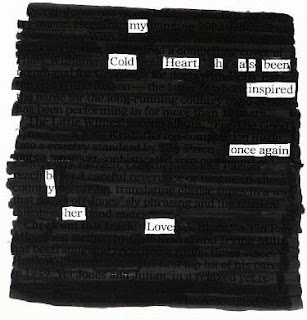 I love the idea of Blackout Poetry. The basic premise is using existing text and finding words within the text to create a poem...then blacking out what you don't need. There are many internet posts, pictures, and videos on creating Blackout Poetry for those interested in looking into this cool genre. Many years ago I tried it with a Girl Scout troop of fourth and fifth graders and they found the concept difficult..and I have to admit that I probably didn't do a good job of explaining it.

I tried a variation of it using magazines where students cut out words and created a poem using their "found" words. That went a little better (maybe because they can tangibly rearrange the words?).

Anyway...I haven't had much of an opportunity to work with students and poetry in several years and then this video came across my Pinterest feed and I got excited about using technology with blackout poetry.


The video was super easy to follow and I created a blackout poem using his instructions and text from DOGO news. 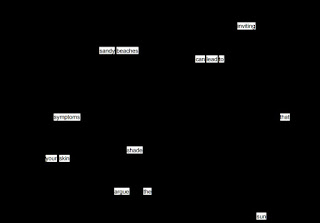 I sent the video and my example to a couple of my tech co-workers who work with middle and high schools as a possible push for ELA classes in April. One of them asked if you could put an image behind it and that got me working on it (here is the same poem with an image behind it). 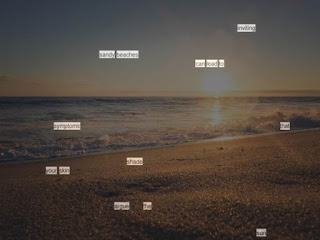 To add an image I had to do it in Google Drawings.

So the poem was created in Google Docs using the instructions from the video and then I downloaded it as a PDF. I then took a snip of it (using the computers snipping tool...and saving it as a picture on my computer). I then opened up Google Drawings and inserted my poem as a picture and stretched it out to fit the canvas. I searched for a picture of a beach (since my poem was beach themed) and inserted that on top of the poem (please note you will no longer see the poem at this point). I right clicked on the beach picture and selected "image options" and used the transparency bar to make the beach image light so the poem would show through. I downloaded the whole thing as a JPEG.

I made this super short video that walks you through the steps.

I haven't tried it with students yet but plan to work with a gifted and talented group of fourth and fifth graders after Spring Break to try it out (I will post their results and how it went).