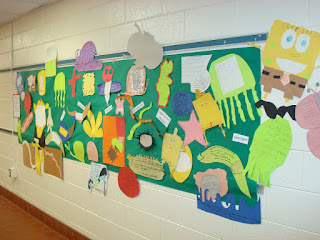 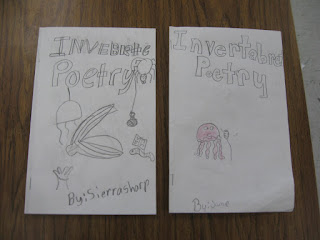 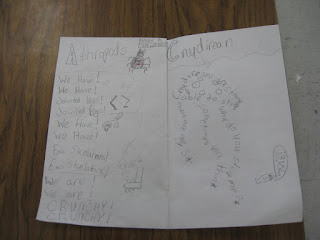 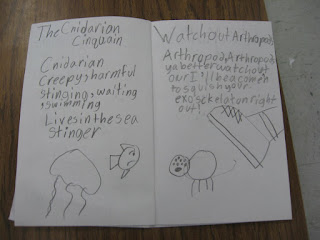 We started learning about invertebrates. In all honesty I probably went into it a little deeper then I needed for the standards, but I was ahead of my long range plans and I taught sixth grade invertebrates, so I had resources, knowledge and time on my side.
What I did was take two sheets of paper and folded them in half stapling it on the seam. This gave students six usable pages on the inside.
I taught six mini lessons each day on each group of invertebrates. I discovered when teaching sixth graders that the groups they needed to know spelt out: C A MESS (Cnidarians, Arthropods, Mollusks, Echinoderms, Segmented Worms, Sponges). This is a great memory tool and I taught each group in order like that. Each lesson took about 1/2 an hour. Then I gave students a choice of if they wanted to work by themselves or with a partner to come up with a poem or song featuring some of the characteristics we had discussed during the lesson. I gave them scrap paper to work through it. They came up and presented to me and I approve, made them add more, or had them completely redo. Once they were done I told them to put it in their booklet, add an illustration, and color.
On the first day I also did a mini lesson about different types of poems (concrete, acrostic, haiku, etc.). I introduced songs the second day (arthropods) after we listened to a YouTube song someone had made up about arthropods to the tune of "I'm a little teapot." Students got to present their poetry or song to the class (only if they wanted to).
At the end of the project students had an invertebrate poetry book with six poems/songs in it that will get glued into their notebook.
The final thing I had them do was take one poem or song that they liked the most and make a creative hallway display with it (giving them construction paper, scissors, glue, etc.). If they worked in a group each student had to choose a different poem/song but they could help each other with the display.
Obviously I got some less creative attempts but there were quite a few that were pretty good. What I like about this project is what I always like about teaching...watching the students come up with things and work well in a group. I literally pulled up a desk at the front of the room, sat down, and watched students rap out songs, share what they had come up with, ask better artists to help them with pictures, etc. I did have "redirect" some students and groups but for the most part we got into a rhythm of the day. Students were so excited to share what they had come up with.
I had one class, my "challenging" class, who did not focus like they should. Now that the project is nearly over I am reflecting on what would have been a better way to handle that group. They are made up of some of the chattiest children, that when separated into groups used the time to talk...talk...talk (not work...work...work). There are several children in that that class who will be lucky if they pass this assignment. However, I had several children who took the assignment seriously (maybe not being as creative as some of my other class, but they worked hard and applied themselves). So the question becomes, how do you give a class like that the same opportunities as other classes when the majority can't behave? Sigh...this is an age old teaching question.
I am giving students two grades....one on the finished booklet and one on their hallway display.