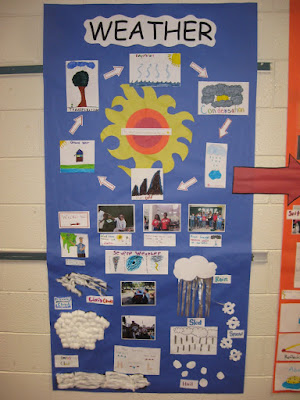 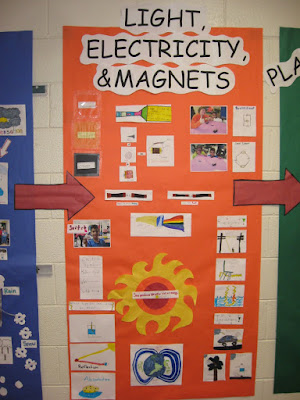 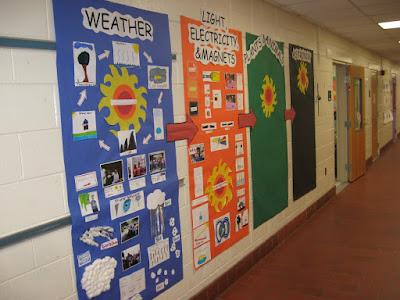 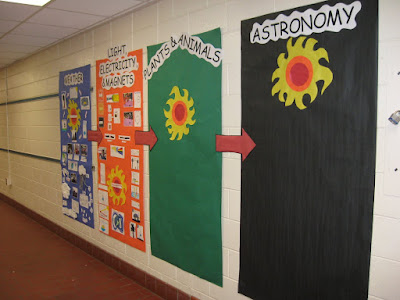 We have a big inspection team coming to one of the school's I go between at the end of February and that got me thinking about hallway displays.
I wanted a hallway display that could be left up all year and simply added to as the year progressed. I originally thought of doing what I did in the pictures above but labeling it 1st quarter, 2nd quarter, 3rd quarter, and 4th quarter (which I still think is a good idea). I approached the fourth grade science teacher and she was game to let me put it up outside of her room (my old classroom) and pull children to put together the display for the first two units in science. The idea is that then the children would add items to the next unit they are moving into.
I have received a lot of compliments on the display and I sort of hope others use it to spring board their hallway decorations. It can be put up at the beginning of the year and just added to each quarter.
I added a sun to each unit as the connecting link between them. One teacher thought that the blank sheets could be laminated and reused every year.

kherbert said…
I love this. I'm passing this along to our science vertical Team. This would be great to put up outside our gym.

Kate said…
What an awesome idea! I have to save this for next year! I will definitely be pinning it :)
☼Kate
To The Square Inch
February 1, 2012 at 7:44 PM

Dr. Prince said…
I don't really like bulletin boards because students won't look at them in middle school; however, I think the hallway display idea forces them to stop and learn. I think I will try this activity next year and the social studies teacher is interested in doing the same. How do you determine what iis posted on the display? What information is posted on the sun in each display? Would this be a big idea or a connecting statement from one unit to the next?
April 5, 2012 at 8:55 AM

Eve Heaton said…
Ms. Prince - I agree it does serve a dual purpose both as a hallway display and a review! What we have been doing with the students is everytime we cover a concept we ask for student ideas to put on the wall. The student who comes up with the best one gets to make it (or the student who is done early makes it for us). You can put anything you want on the sun. I just like having one thing that connects all the learning we do in science. On the weather sun we put "The sun powers the water cycle". On the light/electricity/and magnet one we put "The sun is the largest source of light and has a magnetic field". On the plant/animal one "The sun provides energy for plants to grow" and on the Astronomy one "The sun is the center of our universe". You can certainly put anything you like. I like the idea of a connecting statment.
April 5, 2012 at 8:44 PM

Unknown said…
Your site is amazing! I have visited many times in the past several years, since I started lapbooking and interactive notebooks with my 3rd grade class. I have used many of your ideas. I absolutely love the hall displays of all the learning taking place. I have just recently started my own blog, right now it is mostly about lapbooking. I would love to leave a link from your blog, would you be willing to link to mine? http://www.doreensrockin3rdgrade.com
Thank you.
May 31, 2015 at 2:59 PM