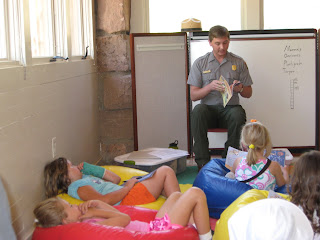 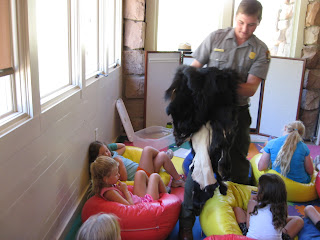 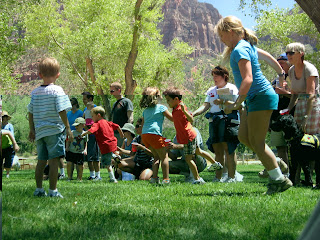 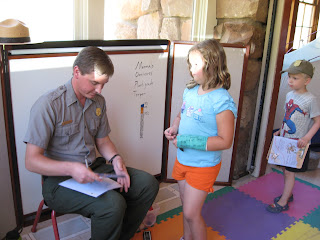 I visited my family this past week and took my neice (age 7) to Zion National Park in Utah to work on her Junior Ranger Badge. As part of the requirements she had to attend a ranger led program and we opted for the Amazing Animals talk about bears.

I got a little nervous when Ranger Colton put the vocabulary words on the board (see first picture) but I thought he did a great job of explaining what each of them meant and getting input from the children. I also liked his graph representing the diet of the black bear - shading in 70% for plants, 20% for water creatures, and 10% for large game (see the board in the last picture). He had a bear skin and talked about the adaptations they had for being successful in their environment - claws, fur, and teeth that were both flat and pointed for grinding plants and chewing meat.

The program was 45 minutes long and he had children go outside to participate in an activity where they became black bears and had to get resources in order to go into torpor. The resources were different colored poker chips on the ground which were worth a certain number of points (parents...or in my case Aunts held a plastic dixie cup while the kids had 1 minute to collect their resources - one at a time and drop them in the cup. Then the children (with or without the parents help) had to calculate the points they earned gathering resources. If they earned at least 60 points they were ready to go into torpor (most of the kids were successful). Next he had all the kids become wounded bears and they repeated the activity but they had to hop on one leg to collect their resources (only a few children got the necessary points for torpor).

I thought this was an excellent lesson for many reasons -

My neice just turned seven so her attention span and retention ability is not the strongest but she was able to recall some of what she learned (bears have 2-3 cubs, they have five fingers and toes, they eat plants and meat). The age group (and nationality) of the children ranged from 12 to 4 (which made the teaching challenging but children got out of it what their age allowed - older kids retained the vocabulary better while younger kids were more apt to remember feeling the claws on the bear carcass).

I definitely filed that lesson away for use in grades that talk about animal adaptations (in our case third grade).

My name is Anthony Capps and I recently graduate from the University of South Alabama in Mobile.

Thank you for sharing this. I can easily see how it could be modified for classroom use. I am about to begin my first year as a third grade teacher. Your blog has been such a valuable resource to help me get started.

Wendy said…
Sounds like a lesson straight out of the book "Project Wild." Great resource for hands on science. Thanks for your post. Loving your blog.