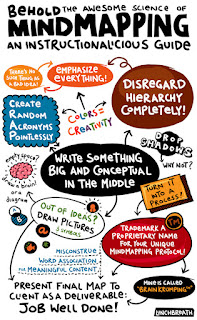 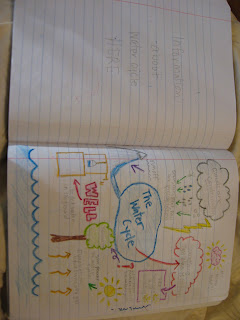 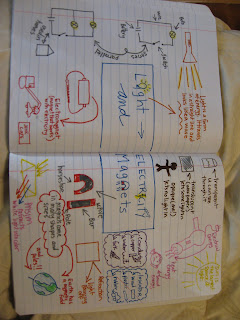 I have been exposed to "mind maps" before but I've never used them in the notebooks. I saw this pin on Pinterest﻿ (see first picture) which got me thinking about how they can be used in notebooks.

Using my trusty craft supplies I created two mind maps in my practice notebook. The first had to do with the water cycle and the second I was thinking of  using it as an end of unit review.

Here were some of my thoughts as I was creating them.

1. Student would need some serious modeling when introducing "mind maps". You can not just show them a sample and say "go". It probably would be best to do it as a group and then have students copy it into their notebook a couple of times so they get the general idea of how it works.

2. I think this would only appeal to the artistic children. I don't think it would damage the non-artistic children to go through the process of creating a mind map but when I was doing it I was thinking that you might need to give those children a choice of assignments rather then just saying "Mind map and nothing else!".

3. A larger scale version of a mind map (see last picture) is time consuming. I would allot at least two class periods to finish.

4. Definitely would need a class supply of colored pencils. In the second picture I used crayons and I wasn't too happy with that. I didn't have colored pencils in the house so I used thin markers for the last mind map (I don't like markers in the notebooks because the colors bleed through on the previous and next pages).

I would definitely try it out with children and see how it goes and add it to my list of possible "right hand assignment" ideas.

Anonymous said…
I love using mind maps to wrap up a unit or teach a concept step-by-step. I use the software program called X-mind to build mind maps on my SmartBoard with my students and then upload them to my teacher site for students and parents to use at home for studying purposes. It helps them to understand how to build a mind map so if we do them in our notebooks, they already have some clear examples on what it should look like.

Janie said…
I love mind maps. I have been using them with my students in my ELA classes. You're right, the artistic children love them and they are a great study guide-plus they look so pretty! The 'unartistic' kids really saw it as a chore :( However, it does make concrete lessons that sometimes are kind of abstract. It's also fun! As a doodler, this is my favorite way to introduce a concept, do step-by-step instruction, compare/contrast, etc... Thank you for sharing!
July 1, 2012 at 2:17 PM

July 18, 2010
Our district uses the McGraw -Hill textbook series (for the elementary grades and Glenco for the middle school grades). I use the textbook in the classroom as a resource. It does not guide instruction, i.e. start at chapter 1 and end at the last chapter (I use our standards and EXCELLENT support documents to guide instruction). Last year I (and the social studies teacher on my team) stopped assigning textbooks to individual students and just kept a class set that we used as needed during instruction. We explained our reasons to our principal (kept the backpacks from being weighed down, cleared up space in their desks, etc.) and he was happy with our reasoning and approved the decision. We also made sure to explain to parents on our back to school night (during that discussion I showed them the link on my website where children could access the textbook online if needed). Our textbook series is not bad (sure lots of non standard stuff but easy to work around). I can not say the sam
Post a Comment
Read more

March 28, 2016
April is National Poetry Month. I use to love teaching about poetry but like most teachers I typically covered the same types of poems all the time. A few years ago I ran into a "new" (to me) type of poetry called Blackout Poetry created by Austin Kleon (there are several videos of him creating poems on YouTube) and I wanted to give it a try. The idea is to "find" words within other peoples writing and create a poem using the words that are already on the paper (and blacking out the words you don't need). If you do a Google search most people use newspapers (and we did too).  As a class we had created "found" poems using cut outs from magazines so I thought this would be a nice, and different, extension of that activity. I was wrong. :) It didn't go as planned.  In hindsight what I thought was going to be easy was a little to abstract for children (fourth graders). On the plus side they took the project to mean summarize the
Post a Comment
Read more