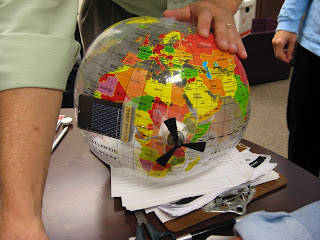 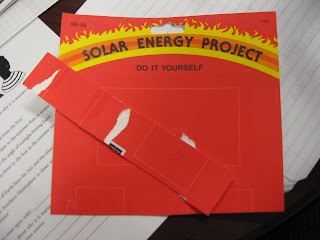 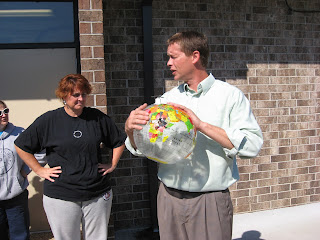 He took us outside and covered up the solar panels. He made a big deal of finding the most direct source of light from the sun and tilting the globe so that the equator was getting the most direct light. He released his hands from both locations and the fan at the equator was going full tilt but the one at the pole was going very slow (because it was getting less light).

This was a great demonstration of how certain parts of the earth receive more or less of the suns energy at different times of the year (causing our seasons).

Unknown said…
I love this idea! I teach alternative energy and this would be a great way to demonstrate solar power. I would also be handy teacher 1st grader about seasons.
I enjoy your blog and was inspired to do science notebooks in my science classrooms. My science team has a blog and would love to get feedback.

Mary Catherine said…
Is that Dr. Thompson from the University of South Carolina? He was one of my favorite professors! I use a lot of his ideas in my fourth grade classroom. Thank you for sharing this!
September 16, 2012 at 2:01 PM

Love your blog. I passed on the simple machines scavenger hunt to some of our 6th grade teachers.

Yes, that is Dr. Thompson. I'm really enjoying his class. He has lots of energy and good ideas.

Anonymous said…
I'm looking for the same product online and can't come up with anything. I LOVE this idea and would like to tie it into my seasons lesson in 3rd grade.

Do you mind seeing if there's a place online that sells this product? Or if you could provide some more information the product that would be so helpful. I did go to Radio Shack online but didn't find anything.

Thank you for your help! What a great idea :)

Eve Heaton said…
I found the kit on Amazon -http://www.amazon.com/American-Educational-4741-Basic-Solar/dp/B005QDPUMY

It is kind of expensive $23 but you would only need two for the demostration and it could be part of a grant write up.

Eve Heaton said…
Here are some other seller -