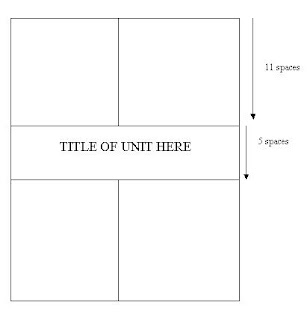 Last year I used the same title page as I had in the sixth grade (see earlier posts under December 2008). It was similar to the one pictured above but it was marked into six sections (3 bottom and three top...instead of a straight line it was a "V" shaped).
I am going to use the above model this year. I think it will speed up making the title pages, which tends to take students a long time to complete. I also found that fourth graders like having specific instructions regarding how many lines they go down before drawing the top line of the title box, so this year I included it in my instructions for them.
Our first title page is on the very first page and is titled "SCIENCE". Since we cover four main areas in fourth grade science the four blocks work fairly well - Weather, Astronomy, Organisms and Their Environment, and Light and Electricity (we actually have five areas with Inquiry but that is a short unit and is worked into the others).
When I do the first title page with students I walk them through the first two (SCIENCE and INQUIRY) and then they do weather and the rest on their own. Sometimes I might do one or two blocks as a group and the rest students would do on their own. That all depends on the class.
I'll have a copy of the diagram above on the board and talk about the units we will be engaged in for the year. I'll ask for suggestion on what we can draw in the block for weather and pick a student suggestion to draw in that block on the board. I'll do the same for astronomy and the rest. I have students copy and color what I have on the board into their notebooks.
I'll post student samples of the new revised title page once they are done.

Frannie said…
I think this will be so much faster and clearer. Thank you for your wonderful blog, I refer to it often.
August 9, 2013 at 9:00 AM