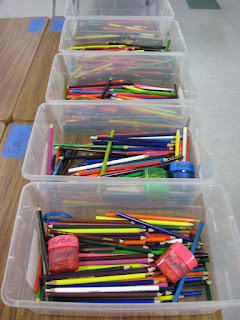 I allow both colored pencils and crayons in the notebook and students started becoming sloppy using the crayons. I decided I wanted colored pencils ONLY. So I purchased five plastic shoe boxes from the local dollar store (one for each table grouping) and loaded them up with the colored pencils I had purchased this past summer when they went on sale for .25 a pack. Luckily I had asked for donations of colored pencils at the end of last year and got a TON (thank you Ms. Musgrave for that suggestion) and divided those up among the five boxes. I then added hand held sharpeners to each box (the ones that catch the shavings). Those were on sale at Staples this past summer for a penny each and I should have bought more. Ideally I would have three sharpeners per box but at the moment it is one (maybe two). Because there are so many colored pencils in the box I have not experienced any whining ("So and so has the only black pencil!") there has been some fighting for the pencil sharpeners but I think I will take care of that this weekend with a trip to Staples.