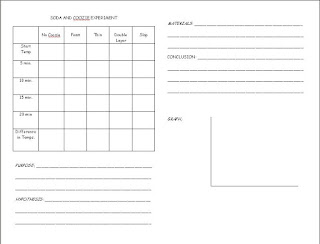 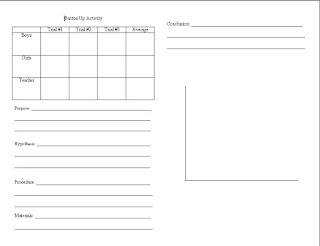 Last week we have been focusing on the steps of the scientific method and identifying variables in an experiment.
Notebook Activities
DAY 1
Left Hand Side - Steps of the scientific method in order with explanation of each step. Whole group instruction.
Right Hand Side Activity - Students created a poster of the scientific method with steps, pictures, and color.
Day 2
Left and Right Side - Lab paperwork (see picture above). We were testing out the effectiveness of different coozies. Students took the temperature of their soda in the coozie every 5 minutes for 20 min. Students watched a taped episode of Food Detectives - How To Cool Your Mouth After Eating Spicy Foods (scientists mention the scientific method during the part where they test the 5 second rule for food dropped on the floor) in between the timing of the soda. Reviewed the steps of the scientific method before and during the experiment and during the TV Show.
Day 3
Reviewed scientific method (we had it down as a chant by this day). Introduced the identification of variables in an experiment.
Right Hand - Fill in the blank sheet about variables. Variable song lyrics on the bottom (students listened to and sang). Song came from Sing Science CD (I use about three songs off the CD - definitely geared for elementary).
I showed variable PowerPoint with ten examples of experiments where students had to isolate the independent and dependent variable (control and constant if in the example). Students called on randomly using "call on me" sticks to answer.
Left Hand - Students got into their clock partners and together answered five questions where they had to isolate the independent and dependant variables. Regrouped after 10 minutes and went over the answers.
Day 4 - Button Experiment
Right and Left Hand - Lab Paperwork (see above). In one of our examples from the day before on the PowerPoint they talked about buttoning shirts with your fingers taped. The students wanted to try it so I set up an experiment. My question was, "Who would adapt better to having their fingers taped down boys, girls or the teacher." It was fun and while I choose the boys for their hand/eye coordination I actually won all rounds (students thought because I was "older" I would be slower :) It wasn't a true experiment because I rotated boys and girls but it worked to illustrate the steps of the scientific method. If you do - have one child button, have another child stand as a mannequin, another child time, and another child make sure there is no cheating. I was able to engage 8 students at a time and then switched them out for the next two rounds using the call on me sticks.
Day 5
Students took a quiz and I gave them time to catch up on their notebook (coloring, getting missing information, etc.). I was grading over the weekend. If they were done early they could work on their lab safety poster or work on a scientific method words search (found online).

Anonymous said…
Eve, We are going to start on our science notebook next week. Is there a way for me to copy the forms you use that are posted on your blog? Let me know. Thanks

Eve Heaton said…
Carolyn - I am so happy you are giving notebooks a whirl. My new group of kids are LOVING it. We had a back to school night and several children popped in to ask if they could show their parents their notebook. I am going to have to post some kid pics. Send me a private email and I can send you any forms you would like. Just let me know. The only downloadable forms I have on the website at the moment are the starter pages and the clock partner page. You can click on the labels on the right hand side of the screen to access those posts.

KATHLEEN REKSTIS said…
Eve,
I teach two classes of 4th graders and I am loving this science notebooking! My new teaching partner uses these with her students and I love the idea. She and I are now collaborating on how we can get our kids excited for science and notebooking! I am loving your ideas and I think this makes sense for kids. Would you be able to share some of your forms with us? We would love to share with you any ideas we have too. Thank you! -Kathy R.
September 30, 2009 at 8:57 PM

Eve Heaton said…
Kathy - I am happy to share any forms I have. Shoot me an email and let me know what you need and I can email it to you (my email is listed under "my profile"). Would love to hear how your students are taking to notebooking.