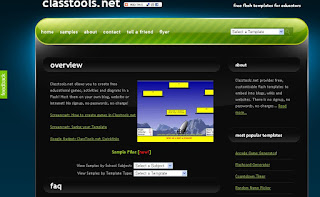 We had a short week (four days) to accommodate parent/teacher conferences. This also coincided with the start of our Fall break here. Students and teachers are off for a week. Our district has Extended Learning Time for students who have been identified as needing remediation and they will have school next week (small groups focusing on reading and math).
Since I had a short week (that also combined an "end of quarter" party Thursday) I choose not to start any new material in the notebooks. We will be starting Astronomy when we get back.
I designated this week "tech week" and had the great idea of teaching my fourth graders Photostory. Sadly if it could go wrong it did. Photostory had been removed from the computer lab computers and our laptop lab during summer re-imaging and I failed to check it assuming it would have still been on the computers from last year. Lesson learned!
The original plan was for students to choose one of the following and create a Photostory complete with music and a voice over (for those of you who have never tried Photostory it is very easy to teach and for students to learn how to use):
- Water Cycle
- Characteristics of Severe Weather and Associated Safety Tips
- Weather tools and their uses
- How clouds form and the three basic cloud types
We spent a day logging in and discovering the Photostory problem. Day two I changed it to a PowerPoint project but experienced so many computer problems that I decided to try again after the break. Day three I decided to teach students how to make their own review games using classtools.net (suggested by Mendy Gannon in the social studies blog under "blogs I am following"). This was much better and students created "fun games" with their clock partner based on kids tv shows (this was to get them use to using the system). The plan is next quarter they would make and share their own review games for astronomy. While some students were typing I was filming the other students conducting a weather review video (will do the same for all future units). I used a Flip camera I had bought last year.
I created a weather review using the same program and linked it on my website for students prior to their test last week. They really enjoyed telling their parents that the arcade style games were part of the science test review!
We made it to Thursday relatively intact and all our class were shortened to accommodate the end of quarter party and AR movie reward (that reduced my last class of the day to seven students). Since most students were excited about being off for a break I decided to show a Mythbusters video I have and had students look for vocabulary they are learning - variables, constants, control, etc. and had them review the scientific method and tell me which part of the show was what part in the scientific method.
I am using my coveted week off to plan through Christmas as for as notebooking goes for the next unit and also what I am going to do in Reading and ELA (as well as organizing my classroom, laminating posters, moving student desks around, etc.).