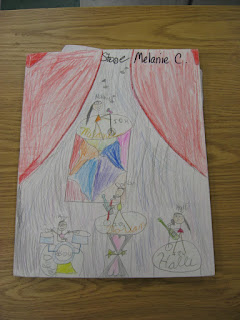 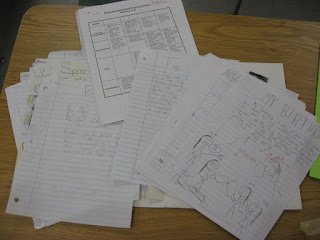 When I moved to the elementary school from the middle school I was hired to teach math, science, and writing. While the writing seemed random I found I actually enjoyed teaching it. I love to write and I love to read what kids write (really hated the grading...particularly since I had over 45 students that first year).
That first year my students wrote some really fun things and like a good teacher I made comments, put a grade on it, and sent it home in student's weekly folders. As a mother, whenever I got those papers from my son I would mean to save them but they generally got trashed by the end of the school year. I wanted to try something different the next year and put together writing folders.
I bought about 30 white two pocket folders from Wal-Mart when they were on sale for .10 or .15 cents. I had students decorate them in the first week and kept them in a plastic tub. Anytime students had a writing assignment finished it went into that folder and stayed there for the entire year. My students had a weekly assignment to give me five sentences (or more) on any one topic so I had quite a lot of writing samples for each child (this was a "homework" assignment that I always gave students time to do in class....if they messed around in class they actually had to do it as homework). I explained to parents at our open house that they would not see writing come home on a weekly basis and showed them a sample file folder. I said that writing grades would posted regularly online for parents to check and if they wanted to see something specific they were more then welcome to come and look through their child's writing folder. Nobody ever came in.
The folders were great to show at parent/teacher conferences. I had one boy who just refused to write and I showed parents the lack of work in the folder compared with his classmates. Another child's writing was very immature and I was able to pull out samples while I was talking to her parent.
At the end of the year the folders went home with their reading projects and science notebook. As a mom, I would have LOVED to have had everything handed to me at the end of the year like this, instead of piece meal throughout the year.
I had one mom come in at the end of the year saying how much she enjoyed pulling out all of her son's writing and seeing his progress as well as having everything in one neat easy to keep folder.
I did kept one child's folder and passed it to the fifth grade writing teacher. I was very concerned about his writing/spelling but couldn't get him in any special services for it the entire year. I thought the fifth grade teacher might like a heads up and some fourth grade samples for comparison and for evidence of a continued disability in writing.
I've heard that some schools require writing portfolios and those tend to be more structured, with very specific writing samples kept in them, which get passed from grade to grade with student records. We don't have that requirement and even if we did I would still keep this idea as a great end of year keepsake for parents and children.