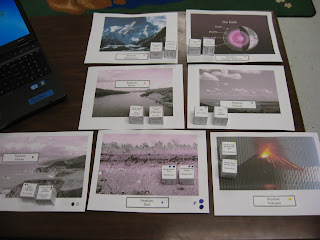 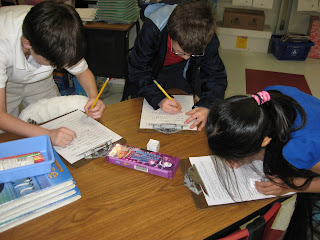 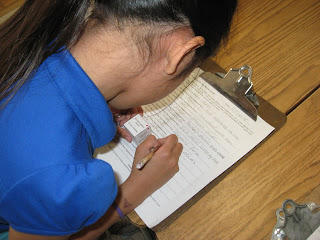 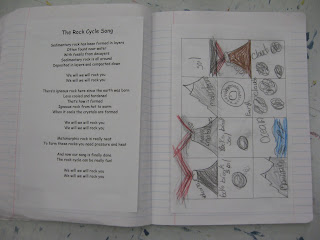 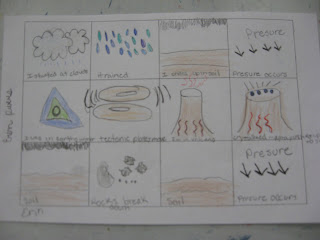 Today I got to spend the day with a 3rd grade science teacher doing a rock cycle activity.

She had asked for help a couple of weekends ago to find some engaging rock cycle activities for her students. I quickly did a Pinterest search and came up with a link to a middle school blog where they featured a fun looking rock cycle station activity. That website took me to the originating activity site - Illinois State Museum Geology Online and their Ride the Rock Cycle activity.

I read through it and felt it was doable for third graders (although I was a little nervous about the cartooning). I offered my help and we put together the activity.

The kids did it WONDERFULLY. It was one of those lesson you wish was observed (but of course never is :) They are on an alternating science schedule so she only had two of the four classes today but it was a good sampling of children. She had one class that had a high portion of struggling learners and the second class had a high portion of gifted and talented children (so the lesson was completed across the spectrum and every child did wonderfully).

The children rotated between seven stations (see first picture - my printer was running out of ink!). The pictures aren't included in the activity but I thought they would be helpful for kids as they rotated. I printed out two copies of the cubes for each station and that was a GOOD idea (in fact I might recommend three copies of the cube - I color coded the stations and cubes with dots so that I could match the cubes to the right station - another GOOD idea). Some stations got a lot of kids and we had to wait awhile as they rolled and wrote down what happened to them (as a rock) at that station.

Once they were done I had five volunteers (individually) go to their first station, tell us as a group what happened, and we had to guess where they went (example: the child is at the volcanic station and told us that he became volcanic dust and went into the atmosphere and we guessed where he would go next). That is not in the instructions but worked as a review for us.

I modified the cartoon page in the activity to fit in the notebook (right hand activity - see bottom two pictures where they illustrated what happened to them in the rock cycle). Then I gave them lyrics to this song I found on YouTube - which we watched twice...once for viewing and the second time for participation to put on the other side of the notebook (the lyrics were put on the left hand side of the notebook - see fourth picture). I modified the song using Movie Maker Live to cut out the annoying bit in the beginning and end (which would have distracted the students I was working with).

The teacher, students, and myself all had a good time (learning) and the teacher is going to do it unassisted with her other two groups tomorrow.

Jana said…
Reading this came at the perfect time. We are getting close to ending our study of the rock cycle and this is a great way to finish up. Thank you for sharing!

Erin said…
I did this activity last year and another teacher I work with is using all my materials this year - it's a lot of fun and I think gives kids a better understanding of the rock cycle. I teach 4th grade.
February 5, 2013 at 9:11 PM

Unknown said…
ditto jana! Using this today as our cumulative review...great activity with lots of chance for discussion. Thanks!
February 6, 2013 at 7:24 AM

A Middle School Survival Guide said…
Love your use of this in the elementary grades.... Perfect for grade 3! Journey lessons are one of my absolute favorites for teaching cycles and processes. Thanks for the mention! ;)

Casie25 said…
The link isn't working. Is there a way I could get the resources from you? This sounds like a great activity for the students!

Eve Heaton said…
Thanks for letting me know Casie. I just fixed the link. It should work now.

July 18, 2010
Our district uses the McGraw-Hill textbook series (for the elementary grades and Glenco for the middle school grades).

I use the textbook in the classroom as a resource. It does not guide instruction, i.e. start at chapter 1 and end at the last chapter (I use our standards and EXCELLENT support documents to guide instruction). Last year I (and the social studies teacher on my team) stopped assigning textbooks to individual students and just kept a class set that we used as needed during instruction. We explained our reasons to our principal (kept the backpacks from being weighed down, cleared up space in their desks, etc.) and he was happy with our reasoning and approved the decision. We also made sure to explain to parents on our back to school night (during that discussion I showed them the link on my website where children could access the textbook online if needed).
Our textbook series is not bad (sure lots of non standard stuff but easy to work around). I can not say the same thin…
Post a Comment
Read more