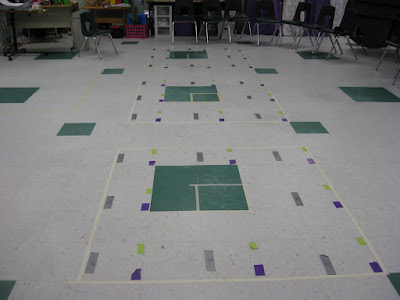 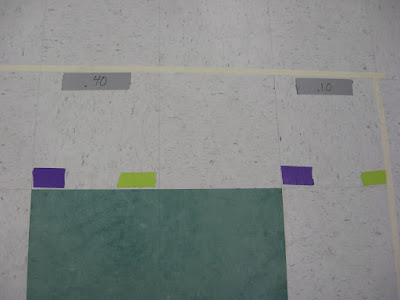 I went to high school last week in our district that has computer center that is pretty cool. One of the things that they had the visitors do is play a game called "Dance to Advance".

On the floor were dance mats like "Dance Dance Revolution". You stood in the middle and looked at the interactive white board. A question popped up in the center and you had to jump/touch the square with the correct answer. It was automated for two minutes with questions coming up and the mats - which were connected to the interactive white board - recording who touched the right answer first. It was a lot of fun and I definitely want them for my classroom. Sadly four mats plus a site license cost $947 (which isn't a lot considering but in our budget crunch most likely would not be approved).

I told a friend of mine about the game and we put together a "red neck" version of it to play with her extended learning math class (extended learning is offered to students during our fall, spring, and summer break as a form of remediation). She said the kids really enjoyed playing it and I popped in to see how it was going and to take pictures. This could easily be adapted for science questions.

She marked off the floor in a large square and marked out a center box (where the child would stand). In the eight boxes surrounding the center square she put three piece of different colored tape (silver duct tape, green painter tape, purple painter's tape). Each color would represent a different game. In one game she was doing percent to decimal. In another she was doing fraction to decimal. In another she was just having them jump side to side to indicate if the number was "prime" or "composite".

If I was doing it for science. I might use one tape color to answer questions about the water cycle. Another tape color for planets and the third for vocabulary.

She had three "boards" layed out on the floor so three students could play at a time. She had three additional students act as judges in front of them (they raised their hand as soon as the child has jumped). The rest of the class had to keep track of which judge raised their hand first, second, and third. If the first person made the incorrect jump it would go to the second person. If that person was incorrect the third jumper had the chance to win. This was a good opportunity to talk about how being the first is not necessary better. It is better to be right then first. Many times the third jumper (who had taken their time) was the winner.

I was glad to observe this teacher because it gave me a better idea of how I would manage it in my classroom if I played it. I would probably plan to play this on a Friday/Monday as part of my end of year state testing review or as part of an end of unit review. It definitely got the children up and moving (and with the week long of rainy weather we've had that is a GOOD thing :)