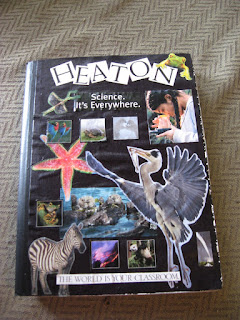 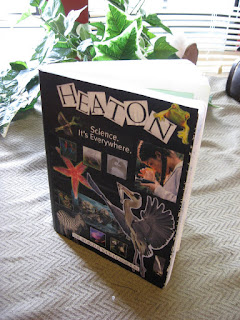 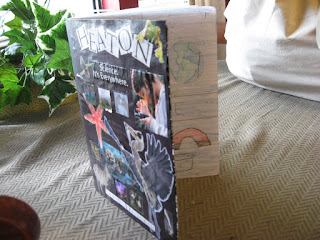 I saw a variation of this at another school and wanted to try it this year. It is a decoupaged cover for student notebooks.
Pictured above is my prototype (which I am glad I did because now I know where the problems are going to come up).
I cut a black sheet of construction paper about the size of the front cover (you could also do this in white...or any other color.). Each student would get one.
Over the school year I have had a lot of National Geographics and science magazines donated to the classroom, which I have been collecting. I went through the National Geographics and cut out any questionable photos - which ranged from naked tribesmen to graphic scenes of war violence. I had a parent volunteer help me. Each table will get a stack of magazines, enough for one per person, as well as a brown lunch bag (which they will put their name on).
They will cut out pictures that interest them and can be tied to science. They will also cut out large letters for their names. They are not trimming them at this point just cutting them out. I am going to ask students to have at least 10-15 pictures (with a variety of sizes). They will store them in their lunch bag (which serves as a means of collecting and storage only). They can swap magazines with each other.
Once they have their 10-15 pictures they can start trimming and laying out on their black construction paper. I would recommend that they do not start gluing until they have figured out where everything is going to go. I also recommend the use of glue sticks verse white glue for this project because the white glue really caused a lot of bubbling. I used white glue in the prototype above and when I got to the decoupage stage the bubbling became problematic (see first picture above).
After they have glued everything down they use a foam brush (cheap at Walmart - craft section) to put down a THIN layer of the Modge Podge on the cardboard notebook cover. They then lay their collage on top of it, working the bubbles out. It should take about 7-10 minutes to dry. I am going to try putting a heavy textbook on top of the collage during the initial drying process to see if that will help get rid of any bubbling (but I am not going to loose sleep over minor bubbling).
Once that is done students will put another thin layer of Modge Podge on top of the collage (students should keep the strokes going in one direction only) and wait for it to dry. My sample above has two layers of the Modge Podge on it and it is fine.
A friend suggested this might be good for the beginning of the year but since the notebooks are treated fairly roughly though out the school year (shoved in and out of storage bins, getting tossed on tables as they are being passed out, etc.) I purposely left it for the end of the year.
I estimate that this project will take 2 class periods. I am going to have some worksheets and activities on hand for early finishers. Once I get some students covers finished I will post their work.