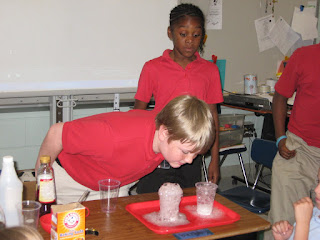 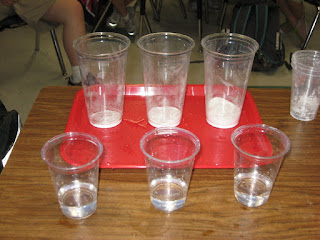 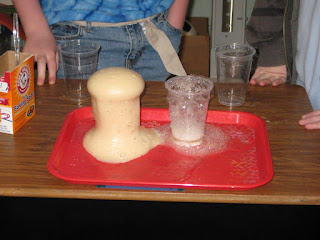 In preparation for our upcoming end of year testing in science I am reviewing all our standards from beginning to end in the next couple of weeks.
One area that students typically do poorly in is inquiry skills. To help us score better I am creating mini science experiments in class that help us review the scientific method, independent and dependant variables, graphing, what makes a fair test, etc.
My hope is that by doing three or four mini tests in our classroom, before the state test next week, that students will have more recent experiences to draw from when answering these inquiry type questions.
This past Friday we did two of those experiments using baking soda and vinegar. Most student knew that when you add baking soda to vinegar you get a reaction. My question I wanted students to answer was, "Does the type of vinegar change the speed of reaction?"
Since the supplies were quite costly there was no way I could do this with five tables in each of my three classes without going broke. I decided this was going to be a whole class experiment and I used my "call on me sticks" to pull students up to do the experiment.
We reviewed the steps to the scientific method, variables, etc. prior to the experiment. Students were asked to make a hypothesis (some students said the white vinegar because there was nothing "in it" that could possible slow down the experiment and some students said the darker vinegar because it was probably "stronger" then the rest of them).
Initially I set up the experiment the best way I thought it would work but by the time the third class of the day got to me I had a much better set up and even thought of things we could have done better (like timed the speed of each reaction instead of visually observed it....which students argued over).
Here are things I would suggest if you are going to do this in class:
1. Use large (extra large if possible) clear plastic cups (my cups were too small initially...I had bought XL cups for another experiment and broke those out for my last class and they worked much better).
2. Get a stop watch and time the reaction from the moment the vinegar hits to the moment it reaches the top of the XL cup.
2. Make sure you use trays underneath
3. Use the "call on me sticks" for clean up of trays and cups as well (students liked doing this)
4. Ask students to tell you ways the experiment could be improved or what further questions did they have that could lead to other experiments (we also tested one of the questions that came up...does the amount of baking soda affect the reaction time?)
While these may seem too "simple" of an experiment it really generated the types of discussions I hope will stick with students when they are asked to answer inquiry questions on their end of year testing.
I am still on the lookout for other simple experiments to do in the classroom that can be done to answer a question. If you have any suggestions I would love the hear them!
Other simple experiment ideas I am thinking of doing this next week
"Does the temperature of water affect the brightness of a glow stick?"
"Does smell affect the ability to identify foods?" (that was an idea I got from Food Detectives on TV that I though that students would like to do)
Normally I would have students record results in their notebook but since we are reviewing I chose to let this just be an observational exercise.

joan said…
Science is not tested in 6th grade, but I love doing the mini experiments with my students. They work so well with all the standards and nothing has a bigger "WOW!" factor than soda and vinegar.

Thanks for all your notebooking tips this year. I used notebooks in social studies and my kids loved it!
May 1, 2010 at 9:01 AM

Lisa said…
I use paper airplanes in my classroom to review the scientific method before testing. I have the students make a paper airplane - all same design. They give it 1 test flight - just to get it out of their system! Then I have them come up with a question about how they could design their plane to fly better? They design their experiment, including procedures, hypothesis, materials list, fair test, multiple trials. Then they exchange with another student to evaluate the designs. Students then get their own experiment back to improve, perform the experiment, measure and record observations, and draw conclusions. Simple, fun, extremely effective, and cheap!
May 14, 2010 at 10:19 PM

Eve Heaton said…
Lisa - I had forgetten how easy and inexpensive paper airplanes are! When I taugh middle school I introduced students to different weights of paper that can be purchased and we looked at the differences and made hypothesis about our airplanes based on the type of paper used. That was fun as well.