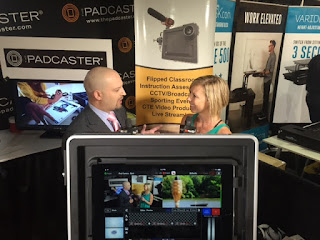 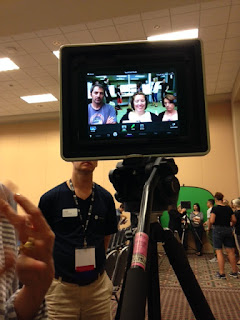 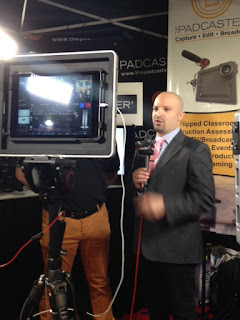 This was by far the coolest "tech tool" on the Expo Hall. The tool is called The Padcaster and it turns your iPad into a video recording studio. My friend Beth (in the first picture) and I were fascinated by it because we both are interested in starting up/improving student morning shows and find ways that students can record "out in the field" with their iPads more professionally. Basically you get the frame and the hardware to mount accessories - like an external mike, lights, etc. There are lots of video on YouTube that review the Padcaster (although they really need one demonstrating its use in a school). The cost was doable - $399 with the understanding that you have to buy the auxiliary equipment (i.e. the tripod).

Beth got her principal to purchase two of them and they bought The Newscaster Bundle. They got a discount so I believe the total for the two was in the $800 range. They are going to need to get two tripods to get started.

In a later session I attended the folks in that session used The Padcaster to demonstrate the use of their app - so I got to see it on the expo hall and in an independent session not tied to The Padcaster (see second picture).

I am excited that we have one school willing to try it out. If successful I should be able to convince other school's to invest.