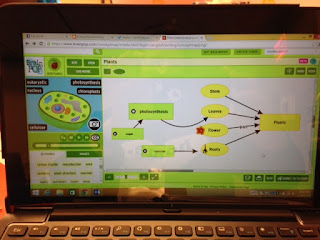 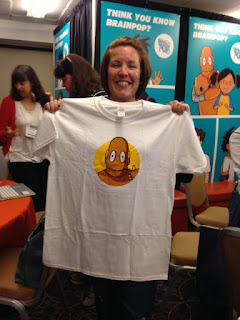 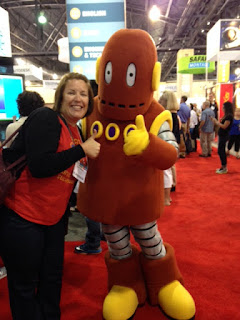 I used to use BrainPop a lot when I was in the classroom. Mainly I used it whole group as part of a lesson. I would show a video and then students would answer the questions on an erasable white board (and then later with our ActivExpressions). We had a classroom subscription at our grade level (we had three 4th grade teachers at the time). In our district BrainPop is not a district "given". If a school wants to purchase BrainPop they have to do it on their own. In my case we (our grade level) was given a certain amount of money to spend and this was one of the ways we chose to spend it (classroom subscription is $220).

At this time we were not 1:1 with our devices so a classroom subscription was sufficient.

The BrainPop workshop I attended was definitely eye opening because it is no longer the "old" BrainPop I was used to using. There is a lot more student interactivity, high order questioning, and tools built into the program that allow students to engage and use the material.

My favorite was their new Concept Mapping Tool. I was sitting next to a teacher and we talked about how in the past for web/map making we used "Kidspiration" and/or Word's "SmartArt" feature. This new feature took concept mapping skills to the next level in both content and design. It is hard to explain so to see it in action there is a video on their SITE.

We got to play around in the tool (see my first picture). I did mine on plants. I pulled up the BrainPop plants video...which then gave me a corresponding vocabulary and picture database (see the left of the screen on the first picture). I could drag and drop vocabulary (or add my own), include pictures, create linking arrows. The drag and drop vocabulary would automatically link to the portion of the video that explained the vocabulary term. You could watch the video - pause at a certain point - and then take a snapshot of that part of the video to include in your web. Once your web was done you can turn it into your teacher or save it to work on another day. It was quite impressive.

Here were some of my notes during the session -

- Does it work on iPads? We are 1:1 ipads in grades 3-5...I used my Dell Tablet in the session...which is what we have 1:1 in grades 6-12. I was told it is not supported on mobile devices at the moment. This wasn't too troublesome as most of our schools have computer labs that can be booked out. It could be used in the middle schools but not being supported on mobile devices it would make it a tough selling point at the elementary level. We currently use the Popplet App for mapping/web purposes but not to the level available through the BrainPop Mapping Tool.

- You would have to have a "school" subscription vs. a "classroom" subscription to use the tool. The school subscription would allow students to have their own accounts and turn in work (which is nice since we are going to a model where students can take their devices home). That is a huge cost jump though (from $220 to $1,695). Not sure how many school's would pay for that (and the tool is only for regular BrainPop not BrainPop, Jr. - although they had focus groups looking at mapping for younger children).

- Would our middle school's (who have Dell tablets...which aren't considered mobile devices) think it was too "baby'ish"? I didn't think the students would but the teachers might...so that might be a tough sell at that level.

- You can't use any outside resources (i.e. pictures or links to other websites). You must use only BrainPop resources (which are pretty robust...so it wouldn't be that limiting).

All-in-all it was a pretty neat tool that I am keeping an eye on. If you already have a school subscription to BrainPop you definitely want to check it out. At a minimum BrainPop does provide their Concept Mapping video free so if you are teaching your students how to concept map you might want to book it for an introduction (I've done mind mapping with students in notebooks before and wrote about it HERE so I would definitely show the video before attempting again with students).

UPDATE: The BrainPop folks responded to this post (go BrainPop!) and they wrote that mobile Make-a-Map will be ready in the Fall. And, that if you don't have a subscription you can always make concept maps with our free movies! The Make-a-Map button is on every movie page. - Yay!

I remember you! Thanks for holding down the fort for us! I just want to mention that our mobile Make-a-Map will be ready in the Fall. And, that if you don't have a subscription you can always make concept maps with our free movies! The Make-a-Map button is on every movie page.

If you have any questions just shoot me an email: laurag@brainpop.com

Unknown said…
I teach 5th grade Science in a middle school campus. My kids love Brain Pop. I work closely with the 6, 7, and 8th grade teachers as I have to teach their specific contents (physical, life, and Earth respectively). The 8th grade teacher uses Brain Pop every week. She counts the quizzes and individual mapping as grades. The 8th graders do not find it babyish at all!!
July 3, 2016 at 11:35 AM