Plant Presses for the Classroom 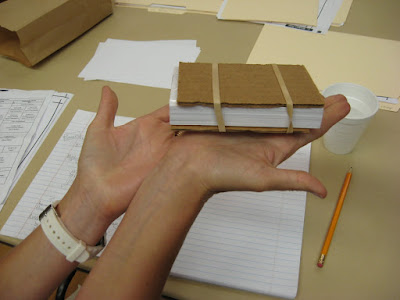 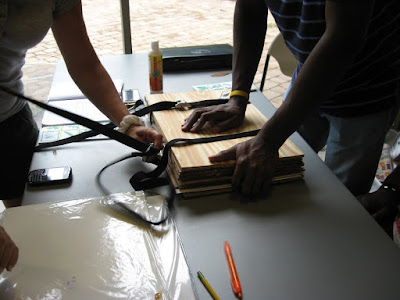 I was at a training this summer where we pressed plants using a homemade press (second picture). I thought that was pretty cool and certainly something a teacher could make using two pieces of cut plywood and pieces of cardboard in between. The plants/flowers were put between newspaper and put on a cardboard piece and then stacked with other specimens between the plywood. The instructor said it take about 2 weeks to dry out. The whole thing was cinched with luggage straps.
They also showed us how to make a mini flower press (first picture) using cardboard and index cards. Obviously these would be smaller specimens and the professor suggested putting wax paper between the layers. The rubber bands would be used to secure the "press".

November 16, 2014
I saw this activity at a science conference years ago and haven't had a chance to use it in a classroom until this week (mainly because I didn't teach weathering, erosion, and deposition). It is a great way to reinforce the definition of the weathering, erosion, and deposition in a highly kinesthetic manner. Basically you break the students up into groups of three. One group is "Weathering" another group is "Erosion" and the third group is "Deposition". Add tape to the back because you are going to stick them to the forehead of the children in each group. The "weathering" students get a sheet of paper that is their "rock" they will be breaking down. At the start of the activity the "weathering" students will start ripping tiny pieces of their "rock" and handing it to the "erosion" students. The "erosion" students will be running their tiny piece of "rock&
5 comments
Read more

February 04, 2013
Today I got to spend the day with a 3rd grade science teacher doing a rock cycle activity. She had asked for help a couple of weekends ago to find some engaging rock cycle activities for her students. I quickly did a Pinterest search and came up with a link to a middle school blog where they featured a fun looking rock cycle station activity. That website took me to the originating activity site - Illinois State Museum Geology Online and their Ride the Rock Cycle activity . I read through it and felt it was doable for third graders (although I was a little nervous about the cartooning). I offered my help and we put together the activity. The kids did it WONDERFULLY. It was one of those lesson you wish was observed (but of course never is :) They are on an alternating science schedule so she only had two of the four classes today but it was a good sampling of children. She had one class that had a high portion of struggling learners and the second class had a high
9 comments
Read more