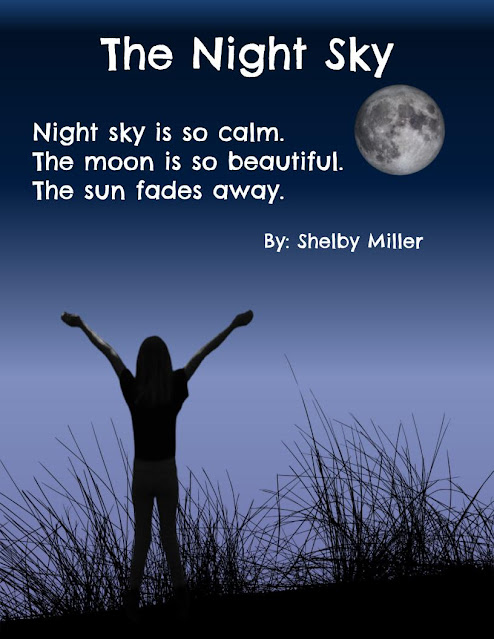 I ran across a YouTube video from an art teacher, Darren Maltais, explaining how to use color gradients to make a night sky scene in Google slides. I liked how easy it was and started looking for a way to use it in the classroom. He has another video for sunrises but the idea is interchangeable.

Since April is poetry month, I thought I could tie it into a writing activity and picked Haiku’s for the simplicity.

I targeted third graders and approached a teacher friend to let me come in and try it with her group. It didn’t go as smoothly as I hoped but I did learn a lot! I made a video of the entire process if you want to check it out.

I naively thought we could do the entire project in one 90-minute ELA block. That includes all the tech components AND writing an original haiku. We should have broken it up into two parts: 1. Writing the haiku and 2. Adding in all the tech elements.

To be fair students had only worked on haiku’s the day before and had very little time to practice. We quickly realized that they needed more modeling and practice in order to get them where we expected third graders to be. Students did GREAT following the 5-7-5 syllabic requirements of a haiku but they didn’t understand how to bring in the descriptive feeling language associated with poetry.

The sun is pretty.

The sun is warm and very hot.

The sunrise is cool.

The teacher and I stopped the lesson and had the class brainstorm some words, feelings, and activities associated with a sunrise or sunset in order to redirect the writing a bit. While the students were getting frustrated with having to rewrite their poems, we were much happier with the results! 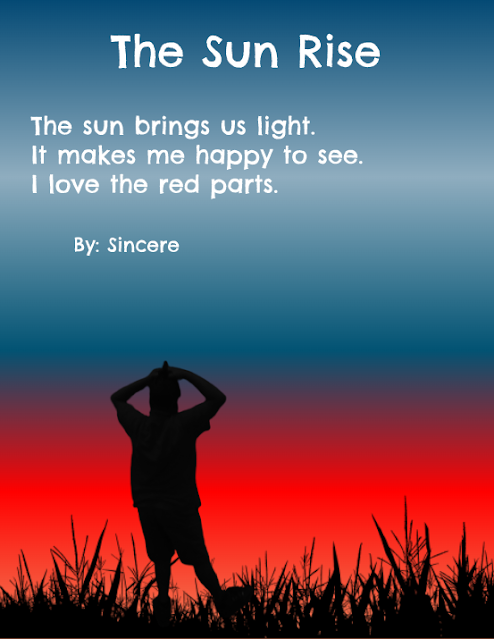 On the tech end I decided it would be fun to put the student's silhouette on the page versus looking for a silhouette (which is what Mr. Maltais suggested...and to be fair that would have been easier). We started with taking a picture of each student on their device and posed them to be a silhouette in the final version (recoloring them in Google Slides). I had looked up "looking away" silhouettes on a Google image search to get some posing ideas. 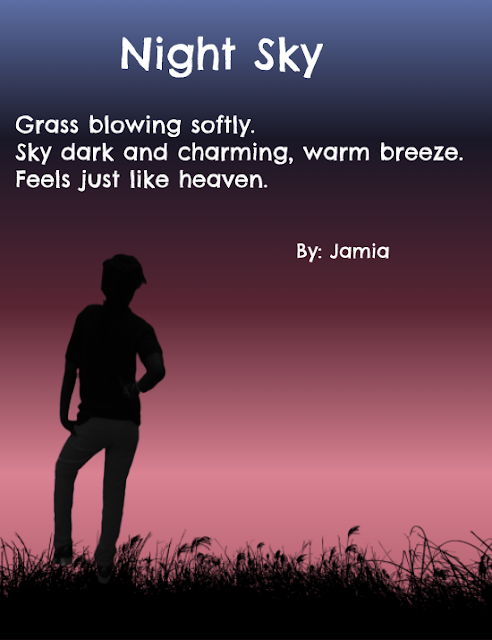 I had created a template in Google Slides for each child, which they opened from Google Classroom. We then picked the gradient colors to use as our background color. We used Adobe Color to find the color scheme as recommended by Mr. Maltais. As a group we recolored the Slides template with our Adobe color scheme. Once they were done, we had them insert a transparent grass silhouette.
When we were done students ran their "silhouette" image through the site remove.bg to get rid of the background and inserted it onto the page recoloring it to "dark4" with the "recolor" formatting option in Google Slides to get the silhouette effect.
At this point all the tech components were done and students just had to type their poem (in our case they had to make them). If you had time you could have students add a moon or sun to the page for a fun added effect.
They turned out adorably! The teacher is planning to make a hallway display out of them.
If you attempt with your student, or on your own, I would love to see the poems. Please feel free to comment below or tag me on Twitter @atechcoachlife.

November 16, 2014
I saw this activity at a science conference years ago and haven't had a chance to use it in a classroom until this week (mainly because I didn't teach weathering, erosion, and deposition). It is a great way to reinforce the definition of the weathering, erosion, and deposition in a highly kinesthetic manner. Basically you break the students up into groups of three. One group is "Weathering" another group is "Erosion" and the third group is "Deposition". Add tape to the back because you are going to stick them to the forehead of the children in each group. The "weathering" students get a sheet of paper that is their "rock" they will be breaking down. At the start of the activity the "weathering" students will start ripping tiny pieces of their "rock" and handing it to the "erosion" students. The "erosion" students will be running their tiny piece of "rock&
5 comments
Read more

Picture of the Day - Activity

August 15, 2010
I attended a training class and a science coach shared an activity that he does with his students to help them differentiate between observations, inferences, and predictions. He puts a picture on the interactive white board as a warm up (he gets the pictures from a variety of sources but uses National Geographic's Picture of the Day a lot). The picture above is from the National Geographic site. He has the students make five observations. Then he makes the students make five inferences. Finally he has the students make five predictions. He does this every day and it really drives home the difference between those three key inquiry vocabulary terms. I've done this activity with both my sixth and fourth grade science classes and the students really got into it and became proficient at telling me the difference between those terms.
13 comments
Read more