Experiment Ideas for the Classroom 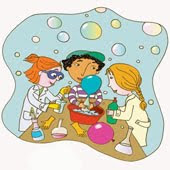 When teaching the scientific method to students I say that all good science starts with a good observation....which in turn often leads to a good testable question.
The problem is coming up with easy, inexpensive, testable questions/experiments for the classroom to prove the point.
I am always on the look out for things I can turn into science experiments which I can then have the students design and/or execute.
I like to do at least three hands on experiments within the first couple weeks of school. The problem I am experiencing this year is that our third grade teachers want to start notebooking and I am helping them out. Obviously we don't want them to duplicate anything we would be doing in fourth grade so I started the great internet hunt for questions I could turn into science experiments (which lasted about 3 hours...which was all that I was good for last night).
Here are some questions that I have that could be turned into experiments:
1. Do aqua globes really work? I actually know that our AP has a set of aqua globes that I can borrow to do this experiment (when I saw her set I started wondering if they really worked...she said "no" :) I love the idea because you can also show the fun "informercial" that goes with it. It would also be fun to have the students film the experiment and post it on a website or blog.
2. On the Steve Spangler site he shows where Taco Sauce can clean pennies. This lead me to wonder if the the "hot" taco sauce would be better at cleaning pennies then the "mild" taco sauce.
3. Over the summer I dropped a neoprene coozie in the water and put a soda into it for my husband. He rejected the wet coozie saying it wouldn't keep his drink as cool as a dry one. Is that really true?
4. My son and I one time put a grow animal in the bathroom sink and the animal grew up the sides of the sink. I was wondering how big it would have gotten if we had grown it in the bathtub. This lead to an experiment I did one year which started with the question, "Does the size of the container affect the overall growth of one of those grow animals?"
5. We are located close to the ocean and most of my students have been swimming in the ocean or rivers in our area. I tell them that I often see women whose mascara has started to run. Most women use waterproof mascara if they know they are going to be in water which led to my question, "Does the salt content of the water affect if a mascara is waterproof or not?"
6. On Food Detectives....a great show for experiment ideas...they asked how much water is contained in the food you eat (this was part of their 8 glasses of water a day episode). They put a days worth of food in a dehydrator and compared the before and after weight. We actually have a food dehydrator at our house and I thought it might be fun to dehydrate different kinds of apples to see which one contained the most moisture. If you live in a big hunting area I bet at least one parent has a food dehydrator you can borrow.
7. I've seen this done in another fourth grade classroom and thought it would be a great start of the year activity. "Does the size of the watermelon affect the number of seeds found in it?" On this one students would have to collect data about the watermelons - length, girth (great vocabulary word), weight, etc. Then you would cut it up and the students would eat and spit their seeds in a cup to count later. This can also be done with pumpkins around Halloween.
8. This one I am retaining for the fourth grade since it ties into our light unit. Does dark fabric really absorb more heat then light fabric? Get a couple of bowls of ice. Put black fabric over one and white fabric over another. Observe what happens.
9. In another Food Detectives episode they show that tapping the top of a soda can is not effect in reducing the explosion of a shaken up soda. They go on to prove that tapping the sides of the can is affect. As I watched this episode I wonder, "Exactly how many taps do you need?" and "Is it more affective to tap in one spot or in more then one spot?" If you do this experiment you might head to Walmart and get an inexpensive plastic travel poncho from the backpacking area so kids don't get too wet.
10. In another Food Detectives episode they tested various methods for cooling down a burning mouth after eating hot wings. I thought this experiment could easily be done in the classroom with some willing parent volunteers (if I were still teaching 6th grade I would get student volunteers but with parent permission...SIGNED :) The show made me think back to a time I was with my husband and all his brothers at a wing place and they all ordered the SUPER HOT wings as a test to their manliness. The waitress said that if it got too bad for the men that they should open up and eat sugar packets to cool down their mouths. I had never heard of that. My question would be does sugar packets really cool down a super hot mouth?
So there you have 10 science experiment ideas that all started with some observations or another that lead to questions that could be tested in a classroom.
I would LOVE LOVE LOVE it if visitors to this blog can share any other testable questions they have or have done in the classroom.

Ginger Snaps said…
I always do the simple tin foil boat activity. Who can make the boat that holds the most number of pennies? They love this! Another activity with pennies I do is how many drops of water will fit on one side of a penny.

Also, you could test different things between boys and girls. Who can jump farther, who has better balance, etc.
August 3, 2010 at 10:11 AM

Eve Heaton said…
Thanks for the ideas!

Lawn Mower Queen said…
We did the sink and float experiment with Coke and Diet Coke. That lead to a discussion about if the results would be the same with Coke Zero or Pepsi, Diet Pepsi, Pepsi One, Pepsi Max, etc.
August 3, 2010 at 11:12 AM

Eve Heaton said…
I have done the diet coke floating thing in the sixth grade with all kinds of variations of regular vs. diet soda. That was fun. Pepsi Max and Coke Zero weren't out then so I should try it again.

Anonymous said…
I start my students out with a rubber ball and we come up with as many ideas possible. Then they work in their lab groups ("pods") and pick one of the ideas to test. We also do a lab with paper airplanes (6th grade) adding paper clips, changing wing shape, etc to make if fly farther.
October 31, 2010 at 3:00 PM

Anonymous said…
In our Heat Energy unit, we do a simple experiment to see whether cold water will make tea (use tea bags). More than one hypothesis can be generated and tested. A very simple experiment for second grade science. (Compare boiling, warm, and cold water...) Why does boiling water work faster?
June 8, 2012 at 11:45 PM

Micha said…
I know this is a super old post, but I did a cleaning pennies lab this year with my 6th graders and it was brilliant. We tested ketchup, dish soap, water, lemon juice, cola, and something else I don't remember at this moment. Not all the groups ended with the same results (which always thrills me since it can open up so much conversation) so we had a class discussion on why. In the end we discovered the many different metal combinations used to make pennies over the years and discussed that for a true comparison we would have to test all pennies from the same years and with the same metal composition, because they may not all react the same to other substances. Seriously, it was one of my proudest moments this year. The kids were brilliant.
April 25, 2016 at 8:52 PM