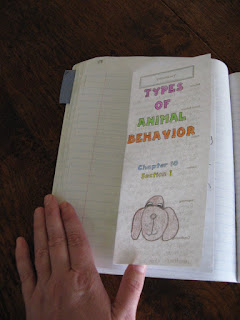 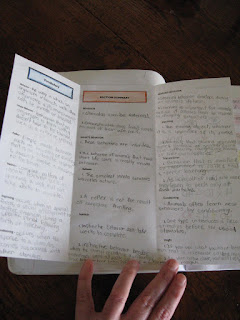 I use Microsoft Publisher templates a lot in my notebooks. This one was an experiment I tried in the middle school using their brochure template. I got the idea from a reading class I took where the instructor had us design a brochure that summarized the ideas from a particular chapter.
The idea was good but probably not all that well thought out. It was entirely too much writing for some of my students and I would certainly tone that aspect down if I were to introduce it in the elementary school.
My inside flap of the brochure had key vocabulary words from the chapter that they had to define. I liked that and would keep that going forward.
The middle and last flap I had students look at the subheadings of the chapter (which I wrote into the brochure) and asked them to give me two sentences that isolated the main points of each subheadings (there were a lot). My struggling students had a very hard time with this project. I wound up having to differentiate (the assignment was originally supposed to be independent work) by having students read sections out loud and then as a group coming up with two sentences that isolated the main points. That took longer then I anticipated.
On the back flap the students had to draw examples of inherited and learned behaviors in animals. The entire thing was glued on the back to the book.
I still think brochure summaries are a great way for students to engage in textbook material. I would probably go back to the drawing board a bit on it but I wanted to highlight other Microsoft Publisher templates I have used.