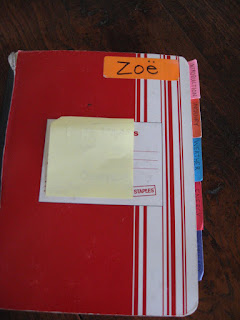 Storage of the notebooks varies from teacher to teacher.

Some teachers require the students to be responsible for bringing them to school each day. I tried this and it did not work for me. The group of students I had at the middle school varied from being very responsible to being...well...not very responsible. Some of my not so responsible students "lost" their books or never brought them to class and had to do the work on loose leaf paper until they "found" their books and we could glue the loose leaf sheets in. I decided that the notebooks were going to stay in my room.

Some teachers might argue that by doing that students aren't going to learn to become responsible but it was simply not worth the headache of having to deal with lost, misplaced or simply missing notebooks for me. I gave students other opportunities to show responsibility or learn it but I wasn't doing it with the notebooks.

Some teachers had milk crates stacked like shelves that the students stored their books in. I wasn't a fan of this method because it was very difficult to see whose book was whose and the students were very rough on books that weren't their own. The plus side to that is that it took up less space then my storage method below. The bins were stacked four or five high depending on how many class periods you had in a day.

I bought wash tubs from Walmart (they come in red, black and white) and trained students to stack them right side up in the tub. The tubs occupied one of my lab tables in the middle school and are on the counter in my elementary school classroom. There was a bin for each period I taught. The bins were labeled in the front as to which period. I put large name tags in the upper right hand corner of each notebook so that students could flip through the books easily and look for the one with their name on it. I started to run into a bottleneck situation at the tubs and assigned students to pass them out in the middle school.

I use the same washtub method in elementary school but my students are sitting in tables of four. I have a weekly table runner and that person is the only person who passes out the books and collects them back up. When table runners get their books they are already grouped according to who sits at their table (since that is how they put them away) and it is easy for them to grab the four or five they are responsible for.

Above is a picture of one of the books so you can see how I put the name label on. The composition books have places where students put their name but they vary per brand and it was difficult to see.

SIDE NOTE - Some industrious students like to put book covers on their notebook. I allowed it in middle school simply because I had no experience with it. I made them all take them off after the holiday break. They would not retain the name tag and they became a serious distraction.