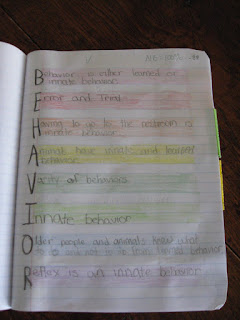 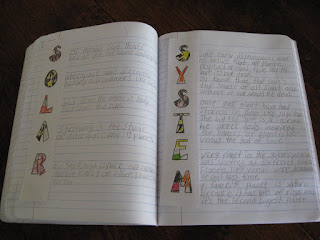 Having students complete acrostics is another way students can engage with the textbook or the material.
In the first picture students had to design an acrostic using information in a specific chapter of the text. The example is a little weak and I doubt the student received full credit for the assignment. The rules are you can not use one word next to the letter and it has to convey a full thought...it doesn't have to be in a complete sentence format but I have to understand something about what you have written (I see that the student listed Innate Behavior under "I"...well I don't know anything about innate behavior from reading what she wrote so she would have received less points as a result).
The second acrostic was from my elementary school students and I gave them a rough draft format, which they then had to approve through me before transferring to the notebook (the acrostics were also published online by the students at our blog site http://www.mrsheatonsclass1.blogspot.com/). This was their first time doing an acrostic and I wanted them to get an idea of what the expectations were and the importance of rough drafting their ideas before putting them down. The next time they do an acrostic I can refer them back to this example and grade them a little more realistically, since the work will have no teacher input.
You can also see that in the first example (middle school) students wrote out the letters of the word on their own. In the second example (elementary school) I glued in strips with the word prewritten. I felt having the words preglued in was a way to help the students with their spacing.

July 18, 2010
Our district uses the McGraw-Hill textbook series (for the elementary grades and Glenco for the middle school grades).

I use the textbook in the classroom as a resource. It does not guide instruction, i.e. start at chapter 1 and end at the last chapter (I use our standards and EXCELLENT support documents to guide instruction). Last year I (and the social studies teacher on my team) stopped assigning textbooks to individual students and just kept a class set that we used as needed during instruction. We explained our reasons to our principal (kept the backpacks from being weighed down, cleared up space in their desks, etc.) and he was happy with our reasoning and approved the decision. We also made sure to explain to parents on our back to school night (during that discussion I showed them the link on my website where children could access the textbook online if needed).
Our textbook series is not bad (sure lots of non standard stuff but easy to work around). I can not say the same thin…
Post a Comment
Read more