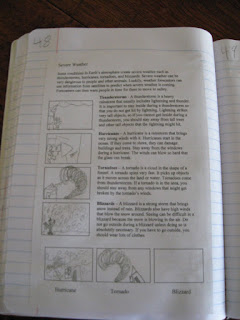 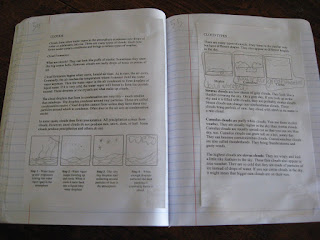 If text is very long I look for ways to break up the reading by having student draw something in a box I have added to the text.
In the first picture we were reading about characteristics of hurricanes, blizzards, thunderstorms and tornadoes. I created boxes while I was typing the information and gave students a few minutes to draw a scene that featured some characteristic of that type of severe weather. I was rigid about the time frame. If the student was not done they would have to finish later. Students also were required to color the pictures in but most had to finish during their free time. Their right hand assignment was to complete a venn diagram comparing and contrasting two of the four severe weathers discussed.
In the second picture we were discussing how clouds were formed and the three types of clouds. The drawings in the boxes was their notebook activity for the day (we also watched a film about it so I had very limited time to work in the notebooks). On the first page students drew the steps of how clouds formed (using the text above as guidance) and on the second page students drew and labeled the three basic cloud "shapes."
Students like the read/do model since it does require them to engage in the text a bit more then just reading and highlighting.

Mrs. T said…
I love your science notebooks! I am preparing myself to do them with my 3rd grade high ability class next year.

I have a question about this post. Your readings - did you type what your textbook has or is that a summarized version of your textbook?
March 1, 2009 at 9:02 AM

Eve Heaton said…
Our textbook isn't the greatest so I pick and choose what I want to use out of that book and basically retype it (our state has really good science support documents that goes over exactly what the students should know). I also use internet sources, other textbooks, and a state practice workbook that I get information from. If you don't want to retype you can always copy and shrink down for the notebooks or use cloze notes where students have to find the missing text by reading the assigned book/article.