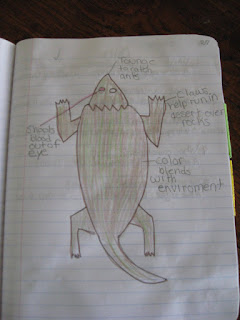 This is another notebook idea that I used last year after seeing it in someone elses notebook. It is called a sensory figure. In the example I saw it involved a Roman Solider, which the students drew. They then had to label the five senses on the solider and tell what they would see, hear, etc. as a solider during that time.

I used it this one time (loosely) in science as we were talking about adaptations. I had student draw a picture of a horned lizard (we had just seen a video) and label the adaptations the animal had, which made it successful in its environment.

Another idea, I didn't do but will next year, is have students draw a picture of a scientist during our inquiry unit and have them label how they would use their senses in the lab.

I would love to hear if anyone has any other ideas for applying this feature to science.

Ginger Snaps said…
I love this! I can use it when teaching adaptations in 3rd too! But, I can also use it for historical figures in S.Studies. We do a similar activity when we study Francis Marion of the Rev. War. They turned out really cute last year.
October 3, 2010 at 9:51 AM

Unknown said…
I love this idea! I am using this in science this week. We are studying the desert caravans of the Sahara. They can pretend to be a camel and identify what their senses would tell them in the desert, at an oasis, etc.
September 17, 2012 at 6:02 PM